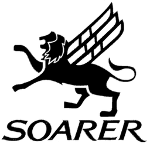 While externally identical to the Lexus SC, the Z30 series Soarer lineup offered different powertrain specifications and multiple unique vehicle configurations. In 2001, Toyota introduced a convertible-only successor which appeared in Japan as the fourth-generation (Z40 series) Toyota Soarer, and elsewhere as the Lexus SC 430. In contrast to previous series, the fourth-generation Soarer and Lexus SC were based on a single model and were largely equivalent. In 2005, following the introduction of Lexus in Japan, the Soarer name and emblem were discontinued, and the Z40 became the Lexus SC 430 in common with worldwide markets.

In its home market the Soarer was a competitor to the Nissan Leopard, and Mazda Cosmo coupes, and served as Toyota's "halo car", introducing new technologies before they were installed on other Toyota products. All versions of the Soarer featured a unique winged lion emblem (often mistakenly called a Griffin) as the logo throughout the vehicle.